This piece of work to create inline libraries was both challenging and a lot of fun to produce, and it’s something I’ve wanted to get round to for a long time.  Apps Script libraries are a great way to reuse work you and others have done, but you have to be careful that they don’t get out of date. Libraries that refer to other libraries are complex to keep up to date, and worst of all they may disappear or their permissions change at any time.

Google recommend you don’t use them in Add-ons, and although they focus on ‘load efficiency’ (I did a study on this a few years back and found absolutely no evidence of a  measurable load penalty for libraries:  see  Measuring library load speed ), the above are probably better reasons to bundle all the code you use in your app or Add-on.

This builds on the work from Import, export and mix container bound and standalone Apps Script projects and I release it as a library (which you can of course use to inline it to your own project if you want!). Library references at the end of the article

I’ve tried to make this as painless and applicable as widely as possible, so it provides the following capabilities

Once you’ve installed the bmLimport library, the options are the same as those for the bmImportScript library described here Import, export and mix container bound and standalone Apps Script project

After initial preparation, there’s only 3 steps.

Here’s an example converter you can use to inline any of your projects. Just modify the scriptIds

Officially, you’d create (or reuse) a cloud project you’ve created in the cloud console, turn on the Apps Script API, and then change the GCP project in your Apps Script project settings to the project number of the GCP project. You may also have to enable billing when you do that (although the use of the API is currently free)

Unofficially though, I’ve found you can just let it fail and you’ll get a link that’ll take you to your Apps Script managed project and use that to get the secret cloud project, then turn on the API in that one. You should also remember the project ID somewhere as it’s always hidden in the Apps Script settings. It also means you don’t have to enable billing which is nice. (Since writing this I believe this loophole has been somewhat closed – although you do get a link to the apps script console project on failure, the console directs you to your last opened non Apps Script project. If anybody finds a workaround – let me know!)

Just to be clear – you don’t have to do any of this for the projects you are converting. Just one time for the the converter script.

Once you’ve enabled the API, you’ll need these scopes in your appsscript.json – the same as required for bmImportScript

Because bmLimport allows you to upgrade to the latest deployed version, you also need to give this scope
https://www.googleapis.com/auth/script.deployments.readonly

The constructor requires the same configuration as described in Import, export and mix container bound and standalone Apps Script projects.

Here’s an example instantiation. Here I’m using caching, but if there’s a chance that there’s been a recent upgrade to some of the libraries, then just omit that property

Whether to disable cache – default false. Cache can be useful to defeat the ScriptAPI rate limits if you are doing repeated testing. Only relevant if you instantiated with a cacheService

This describes which version of the referenced libraries to pull, and can take these values

Error: Couldn’t find any deployments for 1v_l4xN3ICa0lAW315NQEzAHPSoNiFdWHsMEwj2qA5t9cgZ5VWci2Qxv2:(cGoa) (upgrade:upgrade to the latest deployed versions) – maybe they were deployed with old IDE?

Modified reference to 1U6j9t_3ONTbhTCvhjwANMcEXeHXr4shgzTG0ZrRnDYLcFl3_IH2b2eAY:(cCacheHandler) from version 18 to head ((head:use the latest version whether or not deployed))

Sloppy upgrade of reference to library 1dajqLysdKo8IoqddtEaGhtUUlSbtSQ1Agi2K5cXSUm0DxXfLYouSO9yD:(bmRottler) from version 10 to head (use the latest deployed version if there is one – otherwise use the head)

The sapi property of your bmLimport instance contains a handle to a bmImportScript instance, so you can do everything you can do in Import, export and mix container bound and standalone Apps Script projects.

Typically you’ll just do this

Here’s the gasgit project before and after inlining

I won’t go into the details of how the underlying functions are exposed and how the library code is wrapped up in this article, but will leave that to another article later.

If you want to revert the project to use libraries again, you can simply restore the manifest from _bmlimport/manifest.json, overwriting the appsscript.json, then delete all files in _bmlimport/*

However, the library has a revert() method to do all that for you. Here’s an example revert script

There’s also a refresh method which will revert your project to library mode, and re-inline the upgrade libraries. Here’s an example of that.

Some thoughts on workflow

You are of course writing destructively to a script project so ALWAYS TAKE A BACKUP if you plan to write back to the same project.

Another approach is to create a new project (you can use limporter.sapi.createProject({ title: ‘some name’}) and write the inlined project to that. Using a workflow like this, you could have the concept of a development version (Using libraries) and a dist version (with the libraries inlined) which you overwrite from the development version using bmLimporter.

I’ve noticed also that the IDE can get occassionally get confused when you change the content of a project it has open. Best to close it and open it again before executing the inlined code (or run the converter with the target project closed)

Another benefit of inlining is that you debug more effectively since all the code being executed is part of your project, so you can set breakpoints and look at what each of the libraries are doing. You can always revert to libraries once you’re done if you want.

It’s quite tough to test something like this on anything other than your own libraries, so I went to the list of libraries discovered by Find an Apps Script library id in 10 seconds with scrviz

There’s almost 300 of them, so I inlined them all into a test project. You can see the list in the limports tab of this spreadsheet along with the results of the inlining. The import-files column either shows the number of files that were added to the output project, or an error message. All the errors are as expected, and are one of these

Note that if any errors are thrown, the project is not written at all to avoid rubbish being written to the project

If one of the libraries you are importing is not really Apps Script, but something taken from webpack style code, then the exports from the library are not visible as normal to the JavaScript parser, so it can’t be properly exported. Here’s what one of these looks like.

This won’t affect the library at all, but it will make that entry point visible when the library is inlined.

I think idea of inline libraries this can form the basis of module management for Apps Script. We know that importing and exporting are not supported (and maybe they won’t be – who knows), but for now we can use this as a kind of npm/yarn to pull in referenced libraries plus all the underlying libraries they themselves reference.

The next step will probably be to allow some kind of configuration file – like package.json in node – that can specify the rules about library inclusion without relying on the Apps Script library management and deployments to trigger inlining. Would love to hear your thoughts via the github repo.

All are also on github in their respective repos at github.com/brucemcpherson 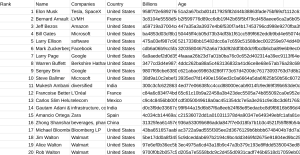 Sometimes you have a forest of spreadsheets each with multiple sheets, but you only want to share a selection of ...
Read More

Encryption and decryption can be a bit cheesy to come to grips with. The most common library is probably cryptojs ...
Read More 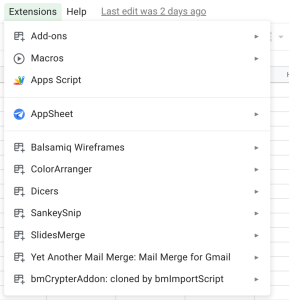 This article covers how to pull scripts from multiple projects and import them into another project. You can even use ...
Read More 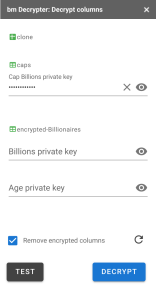 In Merging sheets from multiple sources and encrypting selected columns I published some code for selectively copying columns from multiple input ...
Read More

Info Card customization By default the info card appears when you hover over a node in the scrviz visualization. Although ...
Read More 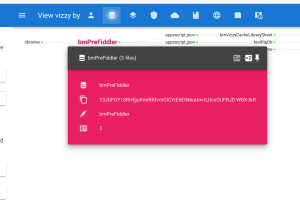 Find an Apps Script library id in 10 seconds with scrviz

You want to include an Apps Script library, and you know it's name, but not its id. A pain right? ...
Read More