Random blog posts
Page Content hide
1 Github as an Apps Script cache platform
1.1 Benefits of using Github
2 How to use
2.1 Create a repo and and a github oauth application
2.2 Setup your Apps Script App to connect to github.
2.2.1 Create a webapp to connect to github
2.2.2 Get the redirect URI and paste it into the github developer console
2.3 Create the crusher
2.4 The plugin
2.5 Writing
2.6 Reading
2.7 Removing
2.8 Expiry
2.9 Fingerprint optimization
2.10 Formats
2.11 Compression
2.12 Plugin code
3 Links
3.1 bmCrusher
3.2 cGoa

Another plugin available for Apps script library with plugins for multiple backend cache platforms so we can use Github as a back end for caching large objects across platforms.

It’s possible to use a github repo as the back end for a caching service, and by taking this approach we can share data between Apps script and multiple platforms. It also means you can retrieve the data with the git CLI in addition. It works in exactly the same way as all the other backends.  I could have used a gist for this, but even a private gist is still public if you know the URL. Using a regulat git Repo means you can make it private and share it using the tools already built into Github.

There’s a little bit of setup to do first as we need to use the Github API.

Create a repo and and a github oauth application

First create an empty repo to use (or use an existing one).   you need to go the github settings/developer  and register a new oauth app, and pick up a client secret and client id.  You can just put anything in the callback url for now – we’ll get that later. 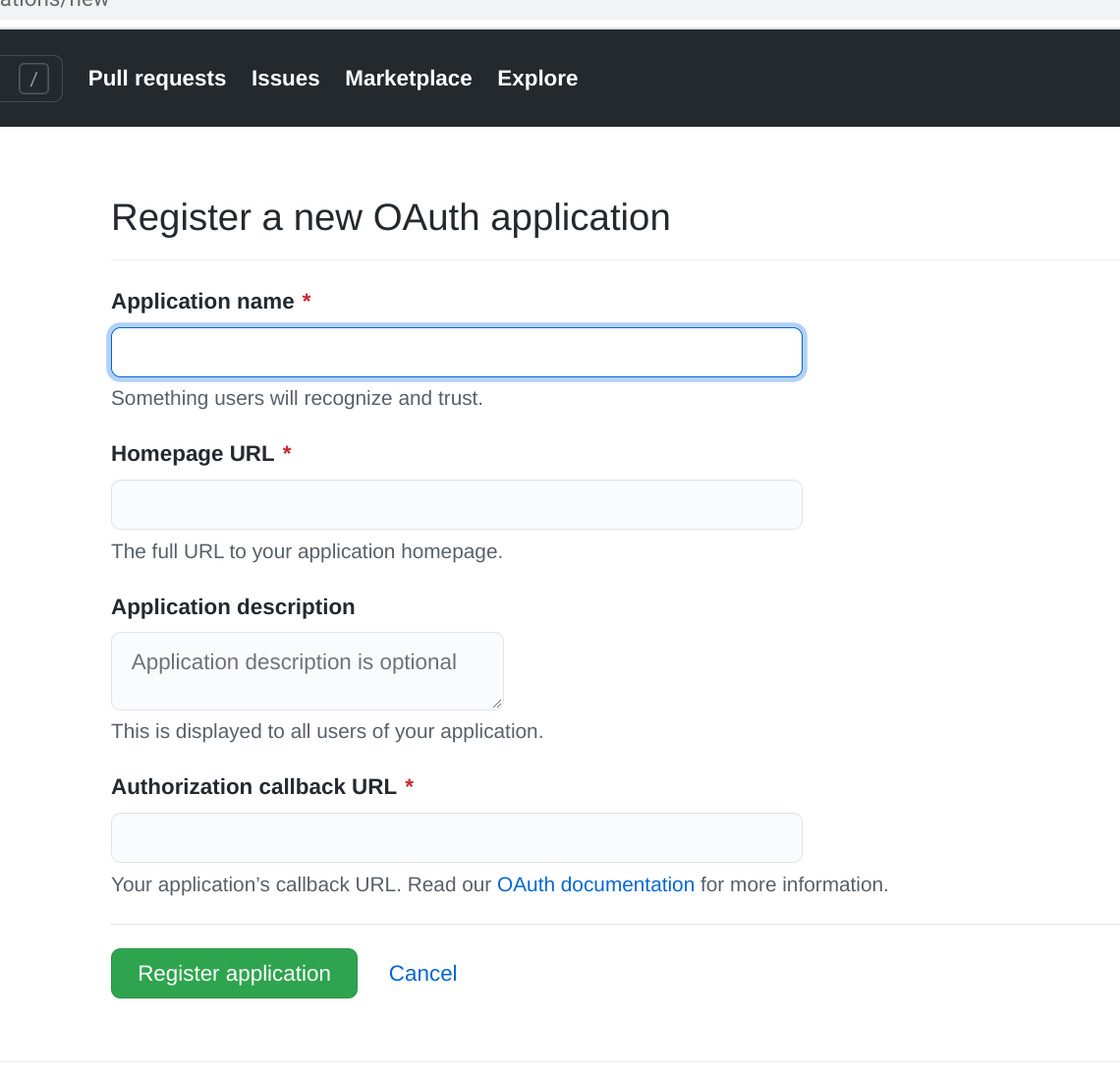 Setup your Apps Script App to connect to github.

You’ll need to add the cGoa library, then create and run this function using the clientid and secret you got from github.

You only need to run it once, and you can delete it when done. It’s just creating the mechanism to be able to get a github oauth token when required.

run once then delete

Create a webapp to connect to github

This is another one off activity. You need to connect github to your app, so you need a simple webapp to do that. Create this function and deploy as a webapp, and kick it off.

one off connection to github

This will allow you to finish off your github oauth application setup and register your app as genuine. Once you’ve copied this in and saved, you can hit start. It’ll go through a github dialog, then say  ‘You’re all set. You can close this tab’. We’re done, and you can delete the deployment. Goa has all it needs to be able to talk to github and deal with the access token refresh dance in the future.

Just as in the other examples, it starts with a store being passed to the crusher library to be initialized. The plugin is used in exactly the same way as the Google platform plugins – like this. I’m using a repo called ‘-crusher-store’, and want all files to be in the path ‘store’ (the prefix)

We’ll be using the exact same methods introduced in Apps script library with plugins for multiple backend cache platforms will now operate on Github instead of the  other platforms. Here’s a refresher

All writing is done with a put method.

Github doesn’t support automatic expiry, but keys with the same name will be overwritten, and any expired items will be treated as if they don’t exist.

Here’s what some store entries look like in Github GraphQL explorer. You can see that one of the entries has been distributed across multiple keys to deal with the maximum value size in Github. Getting the value will restore it to its original state. 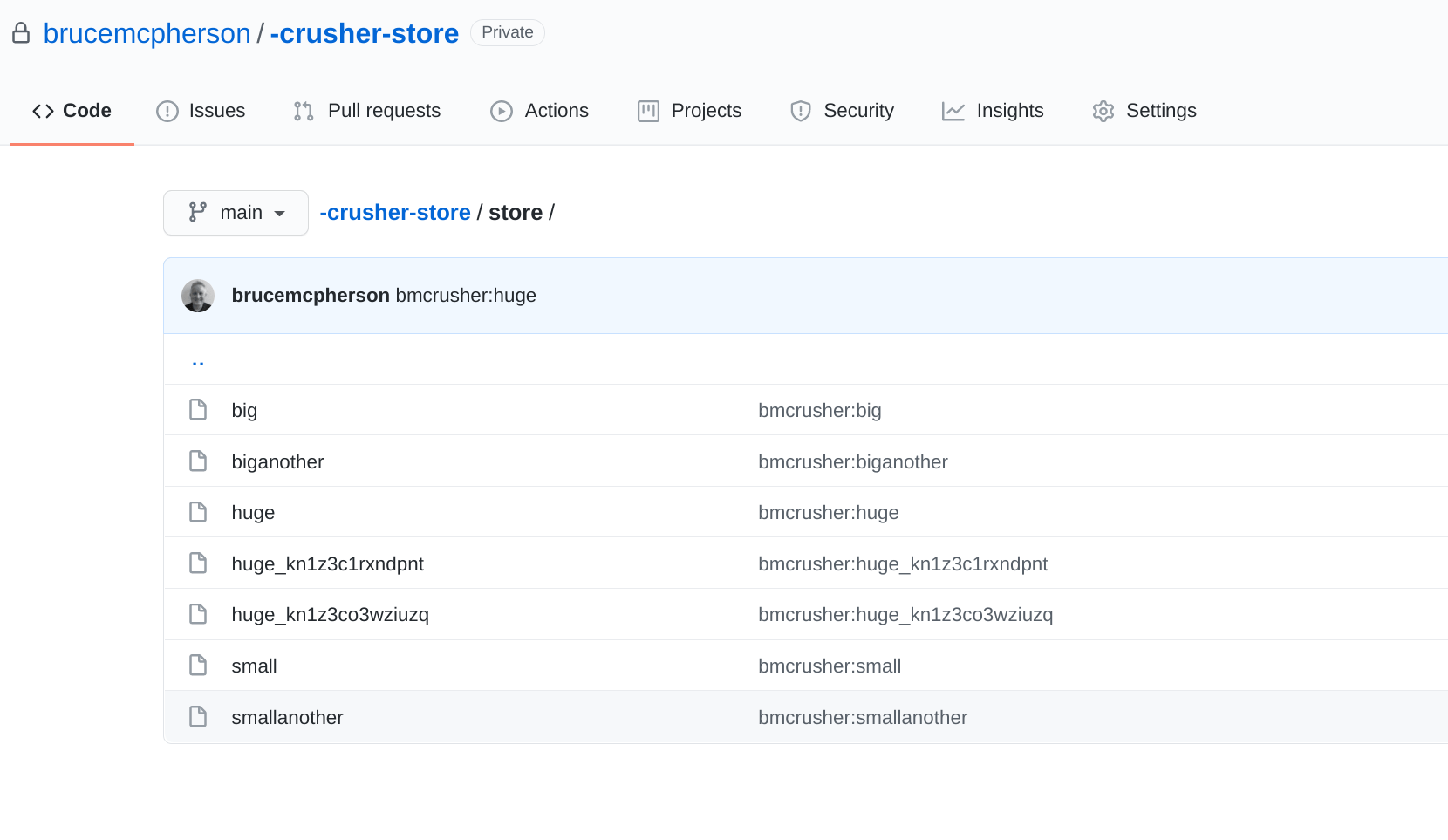 Since it’s possible that an item will spread across multiple physical records, we want a way of avoiding rewriting (or decompressing) them if nothing has changed. Crusher keeps a fingerprint of the contents of the compressed item. When you write something and it detects that the data you want to write has the same fingerprint as what’s already stored, it doesn’t bother to rewrite the item.

However if you’ve specified an expiry time, then it will be rewritten so as to update its expiry. There’s a catch though. If your chosen store supports its own automatic expiration (as in the CacheService), then the new expiration wont be applied. Sometimes this behavior is what you want, but it does mean a subtle difference between different stores.

You can disable this behavior altogether when you initialize the crusher.

Always rewrite store even if the data has not changed

Crusher writes all data as zipped base64 encoded compressed, so the mime type will be text, and will need to be read by bmCrusher to make sense of it.

If you take a look at the code for the API, you may notice that it uses both the Github GraphQL and the REST API. This is because not all mutations are supported in the GraphQL Api yet, so I had to use the REST one for some methods. If Github expand their API at some point, I may update it to full GraphQL

All data is compressed in when written to stores, no matter the back end. Initially, when the stores were intended for Apps Script platform only, I was using a type of compression only available on Apps Script, but now that we can go across platforms, we need to use a different form of compression.

I’ve added a polyfill to Apps Script so it supports both, but by default it will use the Apps Script native method. If you intend to share data outside Apps Script, it’s best to use lz compression. You select it with the “uselz” property when initializing the crusher as below. There’s no real penalty in always using lz, irrespective of the back end, but I leave it as an option for backwards compatibility.

This plugin is already implemented in the bmCrusher library so you don’t need to do any of this, but I reproduce it here in case you are interested in seeing how to write a bmCrusher plugin for some other backend.

How fast can you get OAuth2 set up in Apps Script