Random blog posts
There’s always a little bit of work needed if you are planning to do an OAUTH2 flow that might need some user interaction. Goa now is able to create its own UI to manage the consent process if there is one available. There are a few scenarios, all of which are supported by GOA and are also described  elsewhere in this site in more detail, but let’s look at them again.
Page Content hide
1 UI Types
2 Property Stores
3 One off initialization Scripts
4 Services supported by Goa
5 What’s new in Goa
6 Behavior

Goa protects credentials and token information by storing them in a property store. It’s up to you which property stores you want to use, but this guide might be helpful.

One off initialization Scripts

The recommended way to keep credentials safe is to use goa to write them to the selected properties store, and then delete that function. Goa is able to optionally read credentials from a Drive file so there’s no need to have credentials exposed in a script file’s code.

A number of  providers are supported by Goa – selected by the service property in the credentials. As of today, these are as follows. If you would like any added, please contact me on the community.

Let’s look at modifying the pattern used by Martin Hawksey to use various Youtube APIS as described in this post to take advantage of Goa’s automatic UI capability. First though – using the method in his post.

This is the UI that needs to be published, run once to provoke the authentication dialog, and then  deleted. However, if your app is a webapp, goa.done() can be replaced by returning the code of your app as an HTML service and the rest of the code can be left in place.

The App main code gets its token like this

Since this particular App is running with access to a spreadsheet, we might as well use the Spreadsheet UI rather than bothering with a doGet() function. Goa can take care of that automatically using this pattern.

That creates a consent dialog like this in the sidebar but only if it’s needed. Note that you can just run this function normally. There’s no need to publish anything. Goa is able to take care of the UI if you pass the UI to use to it as in 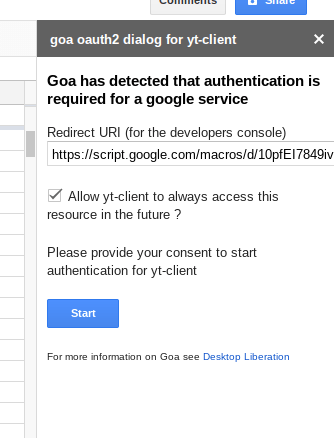 You may prefer to provoke the consent dialog as a dialog box – especially if you are already using the sidebar for something else. In this case, you can do this. Everything else in the pattern is the same. 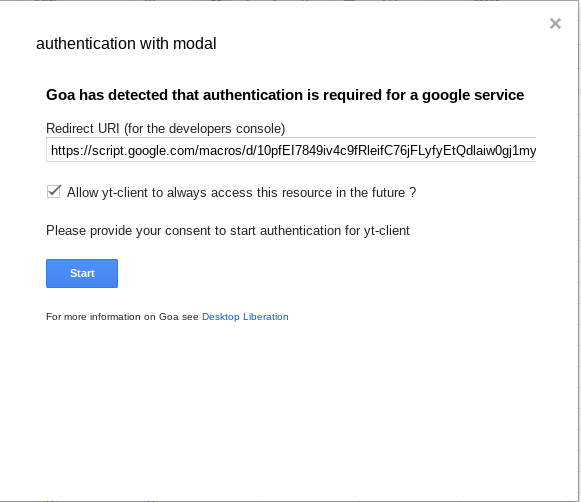 By default, if the consent dialog is required, you’ll end up with something like this, which requires you to then close the window

In addition you’ll notice that the default consent screen shows the Redirect URI which is very handy if you are the developer and need to update the cloud console, but not necessary if being used by multiple users.
A slight change to the pattern allows you to modify this behavior, using the .setUiBehavior method. This changes what goa.done() does. Closing everything when it’s all over is achieved as below.
Without the redirect URI the default consent screen looks like this 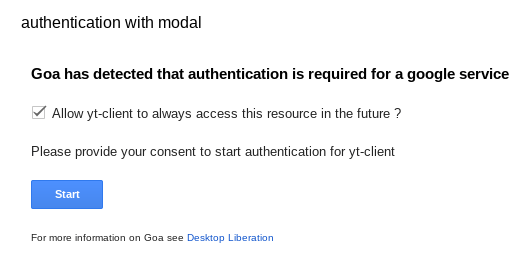 The library, cGoa, is available under this project key.

For more like this, see OAuth2 for Apps Script in a few lines of code