Real Angry Birds
In the toy store yesterday, I came across something odd. Physical games based on virtual ones. We all know  how to play Angry Birds on our smartphones, Ipads etc – but here was a version of Angry Birds – in a box, with blocks of (plastic) wood & rock, birds , pigs and catapults. You can read about it here.

So after years of virtualizing physical activity, here we have a purely virtual thing becoming physical. Of course, we’ve seen manifestations of virtual artefacts before – Star Wars figures, spider man outfits etc, but this is something new in that we are seeing an attempt to materialize both the activities and artefacts that exist only in a virtual world.
Matternet
The idea behind Matternet, is that you could  deliver small, standardized packets of physical things, using a network of drones that moved between switching stations dropping off packages, and collecting others. That way, a packet could eventually find its way to your local switching station, so you could pick it up or drop off (the ‘last mile’) new items to be delivered.  Pretty much like a routed network – in other words an Internet Platform  of physical things, that has been dubbed Matternet. Of course, there is an open source version of this too, so just like early telecom ventures – we have open versus proprietary paths ahead. 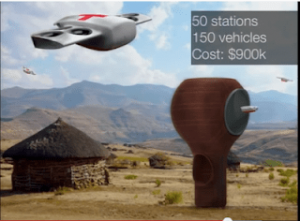 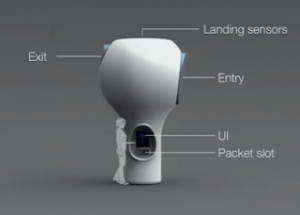 Matternet images come from the video below
3D printing
The real thing on my mind though, is 3D printing. One of the challenges Enterprise Architects face is finding engaging ways of expressing  ‘as-is’ and ‘to-be’ states before and after a transformation program. Demonstrating envisioned simplification of systems, or process efficiency is always pretty dry, and I’m always looking for new ways of getting that message across in a meaningful way. Aside from the usual methods,  I’ve played around with 3d visualization and other techniques but they just don’t always hit the spot in an impactful enough way. So I began to think about how to materializing evidence. Of course 3D printing is  making an impact in building architecture – but that’s a physical model representing the ultimately physical. How about a physical representation of the purely virtual ? I did come across this post, where Thom Baguley has used 3d printing to turn a 3d R-plot into and physical model, and it got me wondering if that could be extended from the mathematical model to a more abstract set of artifacts.
I’m going to think about this a little more – how to materialize Enterprise Architecture artifacts  I’d love to hear from anyone who is also thinking about this, or perhaps even has already done it.
About brucemcp 223 Articles
I am a Google Developer Expert and decided to investigate Google Apps Script in my spare time. The more I investigated the more content I created so this site is extremely rich. Now, in 2019, a lot of things have disappeared or don’t work anymore due to Google having retired some stuff. I am however leaving things as is and where I came across some deprecated stuff, I have indicated it. I decided to write a book about it and to also create videos to teach developers who want to learn Google Apps Script. If you find the material contained in this site useful, you can support me by buying my books and or videos.
Twitter Google+