In Google Apps Script lists and validation I showed how to use custom functions from Google Spreadsheets to perform common spreadsheet tasks like lookup, index, filter, sort, match and apply dataValidation using cloud based lists.

Of course this data, and the functions behind them, can also be accessed by a rest query, returning some JSON for the results, and used by anything that can deal with JSON. In this example, I’ll show how to use these functions to get selected data into Excel. Using this method, you can use the same single list across multiple platforms.

Here’s a slide primer on these functions in case you’re not familiar with them.

The data for these lists are stored in one or more ScriptDBs. We’ll look at 2 ways of getting data out of these lists.

As a noSQL query

In Using ScriptDB as a noSQL store, I showed how to generally get data from scriptDb as a restquery. We can use this to pick up the data in these lists, but this just gives the plain data. For example,

Using the rest to Excel library, we can easily get this data into an excel table, using this general purpose example. This gives us a table that looks like this.

However, it would be better to get access to the custom function capabilities.

All these custom functions are accessible through this Google Apps Script Webapp endpoint, applying these parameters

Let’s say we want the name of the top 10 in the billboardhot100. (this is a list that automatically updates every day through a Google Apps Script timed trigger).

This query will get it 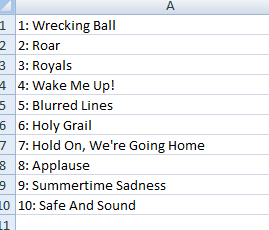 Implementing as custom functions in Excel

Now with this general purpose custom function executor, we can delegate the work to Google Apps Script, and Excel’s only function is to unravel the web response. We could easily create custom functions to mimic that, but do we really want to recalculate lookups and so in with a web access in an excel function ? In my next post we’ll see how that went.
For all the details on how to get the Google Apps Script code and Excel examples, see Excel Liberation.