These articles are abridged from my  book on Office to Apps migration. Going GAS, from VBA to Google Apps Script. Now available for directly from O’Reilly or Amazon.

Now the data has been migrated, the logic migrated and the orchestration is now managed by Apps Script. In most circumstances, the job is done, but there may be some circumstances (legacy databases and systems automation for example), where automation needs to remain on VBA for some time. 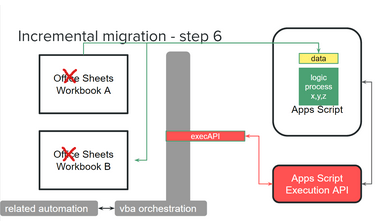 If this is the case, careful attention should be given to quotas and timeouts. In other words if the processes running on Apps Script become too long running, or their results take too long to come back, they may need to be split into smaller chunks.
In any case, any incremental migration project needs as much planning and preparation as a straight cutover and should not be considered as the final operating model.
Another finishing touch you might want to consider is to migrate the color scheme for fonts and background colors from the excel scheme to the Apps scheme. For how to find the closest color in a scheme, see Color Schemes and palettes
All code samples can be found on Github. Note that that VBA samples have been developed for Office for Windows and may need some tweaking for Office for Mac.

Other items in this section

For more like this, see  Execution API and office to Apps migration.