Random blog posts
Deprecated
Google has now stopped its Earth API and Maps API is a paid for API nowadays. Some capabilities have also been either removed or changed. Therefore, I had to remove all examples of VizMap applications I had created. I didn’t remove the entire topic as I thought some of the code may still be useful with some modifications.
Page Content hide
1 Put addresses on a map as markers
2 Bing Maps versus Google Maps
3 How does it look
4 Compare Bing Maps to others

Put addresses on a map as markers

Get the sample application
We’ve already looked at how to geoCode addresses using various APIs and how to create maps with Google Maps from Excel data.  Now let’s look at using Bing Maps  to put markers on a Map using an Excel worksheet as input. As usual you can find the completed example in the googleMapping.xlsm download. Before running this please check the parameter worksheet and change the filename value  for the place that the application will generate a web page to something relevant for your machine. Look for the  filename in the Bing Marker html section of the Parameter Worksheet.

Well the Maps are certainly beautiful, and the interface is nice. However the API is not as straightforward as Google, Yahoo or even OVI.  Because, as usual, Microsoft is ‘different’ to everyone else, I had to compromise a bit on the pop up boxes and mouseovers since I wanted the input data to be common between each version. My biggest gripe was with the separation of box contents into html type content, and regular content.  Since for the other APIs I have used html for the contents I wanted to leave it that way.
When you use the Html content for Bing, all the nice features like a pointer on the box and standard formatting go away so I had to mess around with styles etc to get a presentable box, and still didn’t end up where the others took me without too much effort. There was also a documentation error where the mouseleave event (as everyone else calls it), it called mouseout by Microsoft, yet it is documented as mouseleave. Between that and the html business what should have been a half hour job became a couple of hours.  This along with the poor geoCoding in Bing means I probably wont spend much more time with this one. Having said that the major differences were dealt with in the javaScript and the Excel stuff remains the same.
Here is the Google Code
versus the Bing Code

Bing needs a key, so I used the one that is on the parameter sheet. Please get your own and replace the one on the sheet with your one.

How does it look

The Bing Maps are gorgeous, but the popups are disappointing since I had to build my own to keep the input data standard between APIs. If I spent a little longer I could probably improve them a bit. 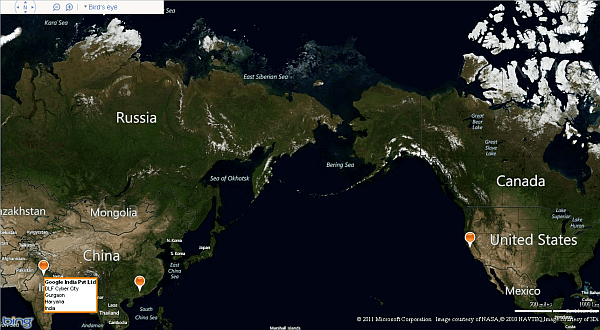 Compare Bing Maps to others

I’ve implemented this exact same thing on other APIs as below.  Take a look to compare. My recommendation is to stick with Google Maps.
For help and more information join our forum, follow the blog, follow me on Twitter