Today I’m going completely off topic. I was fascinated by a G+ plus by John Walkenbach where he referred to this gizmodo post. This was about how people used to mail recorded message tapes to each other in order to avoid expensive long distance charges.

They used this thing to send tapes to each other… 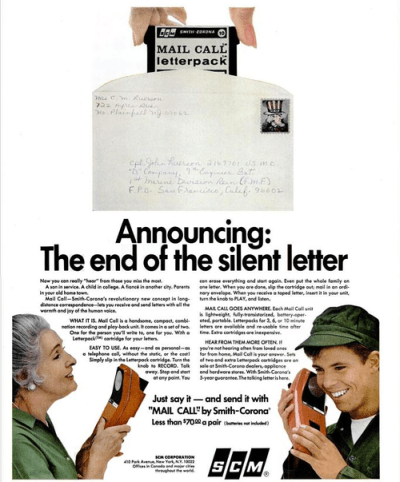 At first I thought it was kinda quaint, but then I thought about my roaming charges for both data and voice each time I travel and realized that actually nothing much had really changed in the past 40 years.

I’m not picking on Vodafone particularly – they are all as bad as each other. But here’s their published rates for roaming in US

Sticking to voice (videos and pictures would be even worse) ,  say you wanted to make a 1 hour call to UK from US, here would be the very rough costs.
Maybe that mail call thing still does have a future…
The more things change, the more the remain the same
About brucemcp 223 Articles
I am a Google Developer Expert and decided to investigate Google Apps Script in my spare time. The more I investigated the more content I created so this site is extremely rich. Now, in 2019, a lot of things have disappeared or don’t work anymore due to Google having retired some stuff. I am however leaving things as is and where I came across some deprecated stuff, I have indicated it. I decided to write a book about it and to also create videos to teach developers who want to learn Google Apps Script. If you find the material contained in this site useful, you can support me by buying my books and or videos.
Twitter