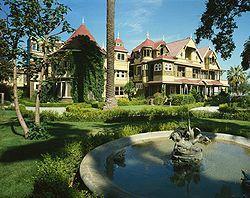 Enterprise Architects often like to refer to Winchester Mystery House as an example of what you get if you build something with no plan, blueprint or end game in sight. This is a house with windows opening to nowhere inside the house, staircases that abruptly end, rooms than can no longer be found, external doors half way up the walls, and glass doors on the toilets.  Thinking about Windows 8, Office 2013 and Microsoft product strategy in general, I can’t help thinking of a version of this house which also has an RV with flat tires in the driveway , a rusting Ford with no gearbox  in the driveway , and an unopened box set of the 70’s series of BattleStar Galactica on Betamax in the den.

I also imagine a lone occupant of this house sitting in one of the 100 rooms burning the furniture to keep warm and cooking over the fire because he can’t find the kitchen and doesn’t know how to turn on the heating. So what’s in this Microsoft mansion ? Certainly there will be an example of every notable tech-fail you can think of. The aforementioned betamax player, a Sony diskman, a tablet PC of course running Windows for Pen Computing, maybe even an Apple Newton (for inspirational purposes),  a Video Disk player, a Nokia n-Gage, some mySpace stocks, an internet connected refrigerator and a set of Windows Vista CDs (still wrapped). All of course are plugged in and on standby, because you never know….

I’ve been using the preview Windows 8 for a while and playing around a bit with Excel 2013. Those of you know the Excel Liberation site and this blog will know that I am a long time Excel geek, and even though my focus is on connecting Excel to external datasources and visualization capabilities, I still have a soft spot for Office. But this just seems to be another house extension, fitted with the latest gadgets that most people will not need or won’t be motivated to understand how to use.

Surely this would be the time for Microsoft to take stock, clear out the junk, and give us a new, meaningful and relevant platform for the future. Instead they’ve just added a new set of patio doors, a solar panel on the roof , a Prius in the driveway and covered over the whole mess in nursery colored paint.

About brucemcp 223 Articles
I am a Google Developer Expert and decided to investigate Google Apps Script in my spare time. The more I investigated the more content I created so this site is extremely rich. Now, in 2019, a lot of things have disappeared or don’t work anymore due to Google having retired some stuff. I am however leaving things as is and where I came across some deprecated stuff, I have indicated it. I decided to write a book about it and to also create videos to teach developers who want to learn Google Apps Script. If you find the material contained in this site useful, you can support me by buying my books and or videos.
Twitter