As you will know by now, ScriptDB is now deprecated. A year or so ago, I published some articles on alternatives to ScriptDB on the desktop liberation site, one of which was Parse.com. This has turned out to be one of the most popular topics, and one which I get a lot of questions of about.

I don’t do many posts on this blog anymore, see this post for why, but I thought I may as well use this, the 200th post, to summarize the status of the parse.com API shared library for Google Apps Script, and quickly show how to get your data from scriptDB to Parse.com.

There are 2 methods of using this library from Google Apps Script.

I would recommend the latter, since it has more features, is easier to use, gives the flexibility to move or to mix database backends without changing your code (and we can learn the lesson from ScriptDB how valuable that can be), and is able to deal with constraints in an abstracted way.  It also automatically provides caching, and does exponential backoff on on rate limited services. It does not yet handle execution time quotas on GAS, but I have some tunkerings for that in the works. Finally, there is also a simple rest API hosted as a Google Apps Script webapp giving complete access to all this from other languages and platforms.
How it works
For Parse.com you need to sign up and get a couple of API keys. You need to store them in a userproperty store, and pass them to whichever of the library options you choose. Let’s look at the data abstraction option first. As an example, I’ll show how to migrate your data from scriptDB below.
Although both versions use batching, using the direct version gives you more control of how the batching happens, but it does mean you need to manage it yourself. Here’s the deleteAndCopy() using the direct parseCom library. In either case, the parse.com database created is identical.
Here’s a snip from the resultant parse.com table 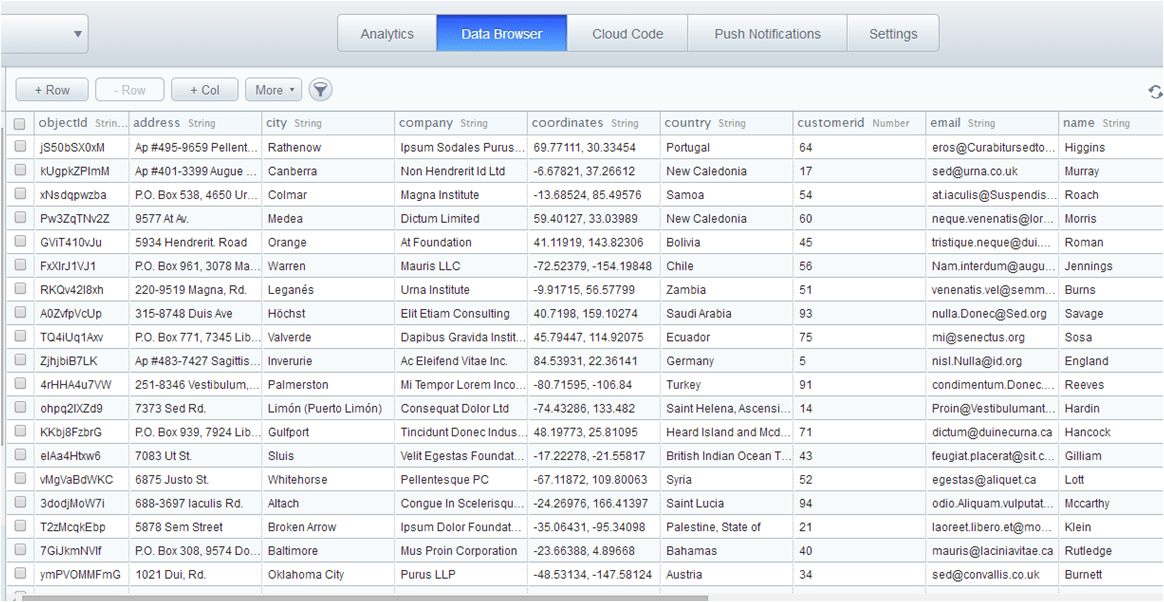 Querying, updating, getting by id, counting and removing are all supported in both versions. For the library keys and details, read more here
About brucemcp 225 Articles
I am a Google Developer Expert and decided to investigate Google Apps Script in my spare time. The more I investigated the more content I created so this site is extremely rich. Now, in 2019, a lot of things have disappeared or don’t work anymore due to Google having retired some stuff. I am however leaving things as is and where I came across some deprecated stuff, I have indicated it. I decided to write a book about it and to also create videos to teach developers who want to learn Google Apps Script. If you find the material contained in this site useful, you can support me by buying my books and or videos.
Twitter