If you are reading this there is a 90% probability that it’s close to the beginning of 2014. I know this because most blog page views happen with the first couple of weeks of posting, and I’m writing this to wrap up 2013.

Here’s a typical page view profile around a blog post from the Excel liberation blog. A brief period of activity followed by very little interest.

By contrast, more traditional web site content tends to grow in popularity over time. Here’s the monthly pageviews of a random page from the Excel Liberation site.

When I started the Excel Liberation site a couple of years ago, it was to ‘force myself’ to continue learn how to do new stuff. I figured that continued growth of page views (seasonal variations excepted) would confirm that I was working on relevant and interesting topics. Decline or stagnation would mean that I was doing the wrong stuff. So far so good – here’s a couple of years of growth on the site – now running at about 70,000 views a month.

On the other hand,with a few exceptions, I’ve found that the popularity of posts in the associated blog has become entirely based on how often I post, rather than the content itself (the blog content is usually based on topics I’ve created for the site). Over time, the topics have become more complex and take longer to realize, yet the growth in site popularity continues regardless of the posting rate. I decided at the beginning of the year to limit blog postings to summarisation of topics from my site, a change in rate from a post every couple of days to one every few weeks. The effect has been pretty dramatic with a decline from about 40,000 views a month to under 20,000. The conclusion is that a blog is an entirely different medium than an organised site and needs almost daily posting. 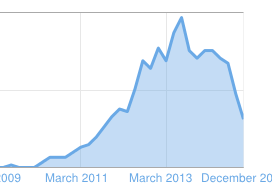 So as blog posts become more ephemeral – almost like tweets – what does that say about the future of the medium?  Tony Hirst and Martin Hawksey clearly spend a lot of time on each post for their blogs, which I enjoy enormously, but I wonder if they see the same relationship between frequency of posts and popularity as I do?
I had originally planned that this post would be an analysis of the half life of posts, but as I looked at the initial data, I decided it wasn’t worth the effort – the life of the post would have been not much more than the time required to create it.
Let me know what you think. Should we just forget about blogging and stick to ephemeral channels such as google plus or twitter?
Happy New Year, 2014.  If you are reading this and it’s not that season, thank you for proving me wrong!
About brucemcp 223 Articles
I am a Google Developer Expert and decided to investigate Google Apps Script in my spare time. The more I investigated the more content I created so this site is extremely rich. Now, in 2019, a lot of things have disappeared or don’t work anymore due to Google having retired some stuff. I am however leaving things as is and where I came across some deprecated stuff, I have indicated it. I decided to write a book about it and to also create videos to teach developers who want to learn Google Apps Script. If you find the material contained in this site useful, you can support me by buying my books and or videos.
Twitter Google+