Last week, I posted how to instrument Excel workbooks so that usage of them could be tracked using Google Analytics. Now we have a week’s worth of data, let’s see what happened.

First of all a recap on what instrumenting VBA actually means. Once I’ve set up a Google Analytics Property (treating Excel as if it were a mobile application), I can use Google Measurement Protocol (a product in public Beta for now), to record stuff against that property. In particular, I wanted to see how a couple of key functions Integrating Google Maps and Earth with Excel and Excel Rest Library were being used, how long web queries were taking using them, and which worksheets were most popular. The instrumentation is described in  instrument Excel workbook, but in summary it goes like this, using the classes supplied on Excel Liberation.

Anyone who has downloaded cDataSet.xlsm or GoogleMapping.xlsm from Excel Liberation in the past few days will have this instrumentation in those workbooks.Right now that data is fairly basic, but it shows me what is being used.

From this I can deduce that 136 different people downloaded these workbooks, and either ran some of the examples, or created their own applications using the instrumented functions contained in them. I can also tell that the measured code ran for an average of 7 seconds,  and there were 2,249 queries executed.

When we registered the event, some text is stored against it. This is used as the ‘screen’ name in analytics. Like this we can track which event happened, and how long it took. I’ve used this screen name to represent running a particular function on a particular worksheet. So now we can exactly which functions were run, and how long they took.

Of course all the other metrics, such as location below are being measured also, and with a little more tweaking we can record Excel version, Operating System version and so on too. Along with Real Time analytics, which also works, this provides a beautiful remote diagnostics tool too. You can of course pull the data into Excel if you want too – for how see oauth2 and Excel Rest Library. 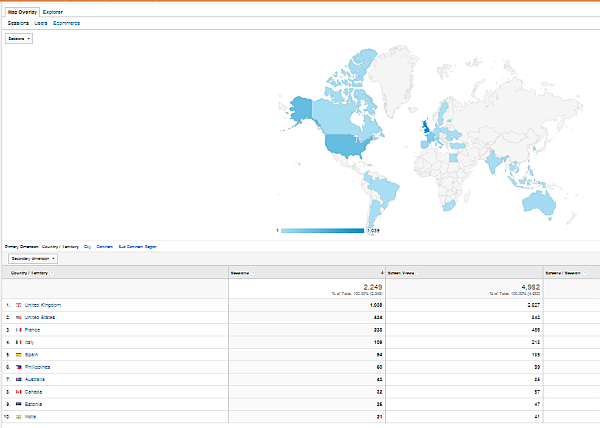 Keep an eye on this blog for more data and more instrumentation once this has been running for a while longer. For more stuff like this see Excel Liberation