It’s been a while since I played around with d3.js. Previously I’ve covered Sankey diagrams, trees, force diagrams and a few others – all straight out of excel. A couple of suggestions on the Google Moderator suggestion area of the Excel Liberation site were asking for this capability to be applied to create zoomable partition charts like Mike Bostock’s example

Turns out this was just a a couple of minor tweaks on the d3tree capability. Here is an example screenshot visualizing some US census data against which presidents were born where. 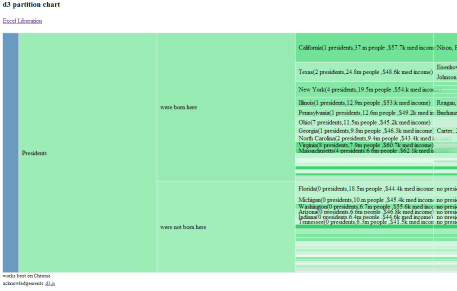 and a live version for those whose browser supports it

You can download the example in the cdataset.xlsm workbook from the excel liberation site. The test data is in the d3zoompart worksheet and the options can be set in the d3treeparameters worksheet. You can get full information and the code for all this at the Excel Liberation site.