Random blog posts
This is a step in Getting an API running in Kubernetes, and you should first have created an app to be deployed as described in Building your App ready for Kubernetes deployment, you have a cluster up and running as described in Getting cockroachDB running with Kubernetes and are using the Google Cloud console shell with the kubectl CLI.

A Kubernetes deployment is kind of a “wish list”. It states that you’d like an app to be run, with various parameteres and instances created, but not how or where to do it. Kubernetes takes care of this by creating and managing “pods” in which the app runs (actually multiple apps can run in a pod, but our example only has one). The principle of this approach is that failures can be recovered from and automatically run on the best available node on your Kubernetes cluster without your involvement.

The deployment covers this part of the process. 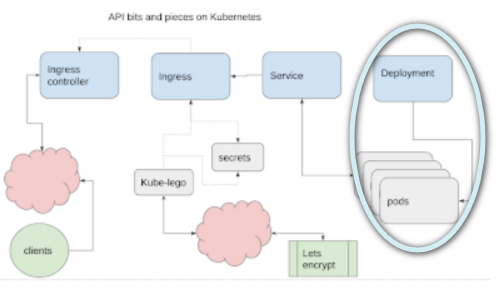 In Kubernetes, you can keep subjects delineated by assigning them to namespaces. This example will stick to the default namespace, so you can see how deployments interact with other resources already running on the same cluster.

This references the image created in Building your App ready for Kubernetes deployment which has a copy in the Google Container Registry.

Kubernetes spins up 2 pods for you, 1 for each replica

The app is deployed, it’s running – if you delete a pod, Kubernetes will start another – this is how it “self heals”. However it’s running internally on the cluster for now – it’s not possible to talk to the app yet. The next step is to create a Service to communicate with the pods. See Getting an API running in Kubernetes for how.