A Kubernetes service is the “product” of one or more pods. The pods are running your app(s), and the service is an abstraction of the final result and communications path to it. In the workflow for the demo playback app, the service part is marked below 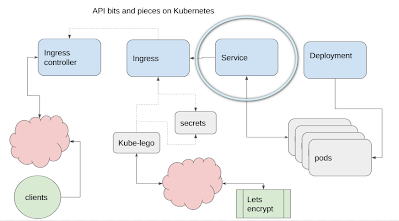 The configuration of a Kubernetes resource can become quite involved, so unlike the deployment example, where it was specified through flags to the kubectl CLI interface, this time the configuration will be in a file. These .yaml files use a syntax not unlike, but more concise than JSON. You can read about yaml here but the layout is fairly intuitive and it’s probably not necessary.

The main points of interest are

A .yaml file can be passed to kubectl with the -f flag and the verb apply (handy for making changes to an existing resource) or create. I generally use apply for both. As a point of interest, a resource can also be deleted by referencing its yaml file along with the delete verb.

Notice that there is a cluster-ip (an internal network address), but no external-ip yet.

At this point you could expose the service directly, since Kubernetes on Google Cloud platform has a loadbalancer type that you could attach this service to with something like. However this is not what we’re going to do. I only show it below to complete the picture.

After a time, this would be allocated an external ip address. You could then head over and open the firewall on that ip address on that port.

But this is not what we need to do – as this will only give an insecure connection, so let’s delete that service again

Now there is an internal service running, offering up the services of your app – but only internally within the cluster. The next step is to work on an ingress controller. See Getting an API running in Kubernetes for how (subpages below|).